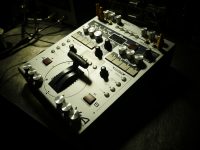 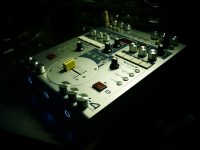 Note:  These are built to order.  Please allow ONE MONTH before item ships.

Pauper strikes again!  It’s the BPMC take on the ever-popular Edirol v4 four channel composite video mixer.  This is the defacto best composite video mixer I’ve ever used.   So many great features in one box.  It produces really lovely video feedback, the onboard effects are all choice (especially the mirror effect), it’s construction is really solid, the t-bar is super smooth, the option to use four inputs is awesome and it seems to have a lot of handy user preset stuff you can save in to memory.  And don’t even get me started on the BPM synced wipe oscillation feature!  Woof!

Space inside is limited but with the BPMC V4 I’ve added a series of nine corruption knobs per channel and a smathering of interesting pushbutton based looks on the front of the unit (three total… not four… not six…. it has changed a bit).  The corruption knobs work by turning one up and then feeding another knob in.  They offer unique and often unpredictable digital buffer ruptures that resemble datamoshing a bit.  Care was taken to cull the most interesting possible combinations and cover the widest rage of effects.  A number of combinations have a slow ride to being full-on and produce some nice effect variations along the way.  I also wired into some different points for each channel as to add a little extra spice between channels.  The front pushbuttons, aside from lighting up your studio with a soft milky glow, offer some unique looks.  The Channel A bank expands upon the colorize features in curious psychedelic ways.  The Channel B bank is where the real HEAT is stashed.  I’ve added two luma trails options… existing elsewhere in hardware only the Video Toaster & the Fairlight CVI!  They are very source dependent, meaning the effects benefit best from certain colors and brightness, so bare this in mind when working with the machine.

The V4 was a joy to decipher but is an absolute BITCH to wire up.  The cost reflects both the going used market value of sourcing NICE v4s (non-beaters), the financial risk associated with ruining one and the time it takes to get ‘er all done.

The only downside of this mixer, brought up by a number of customers over the years, is that the time base correction drops signal for some circuit bent effects on other machines.  It’s the only video mixer I have encountered that does this A LOT. There is no bypassing it other than to use a TBC from your glitch gear running into the v4.  Please keep this in mind when making your purchase.