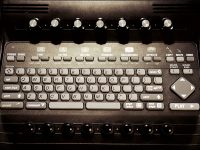 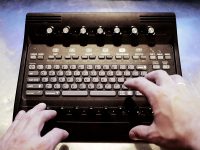 Following on the heels of the long extinct v1 (Video Studio 500) & the recently revived v2 (JVC JX-t88) and originally slated as the keyboard-less Televandalist (last spring already) the Dead Language v3 brings dynamic glitch titling back to BPMC.  Each DL has had it’s own unique titling style and aesthetic.  While the v1 & v2 favored minimalism in their features & appearance I would put the Videonics Titlemaker 2000 (on which the v3 is based) on the more sophisticated end of the spectrum.  If you hit the demo button you will immediately notice that this thing does not fuck around.  Compared to other character generators of it’s era this thing reigns supreme with an extensive assortment of fonts, sizes, colors, textures, backgrounds, scene transitions, pages… you name it.  Where as you NEEDED the original manual to decipher the obscure operational procedures of the JVC JX-T88 you can just dive right in on the Titlemaker 2000.  Videonics succeeded in creating a very intuitive product.

The modifications were really hard for me to settle upon as the Titlemaker 2000 is packed to the gills with secrets.  I narrowed it down to six different global image processing effects (effects that process both your text and incoming signal if present), 8 text corruption push buttons and one knob that varies the degree of text corruption.  Finding stable text corruption effects on the Titlemaker series can be challenging but I’ve honed in on eight very singular looks.  I went the push button route to encourage single effect usage as combining some push buttons will crash the unit.  Where as the v1 would shred apart it’s characters and the v2 would randomize them the v3 does something altogether different.  It’s kind of hard to describe actually.  It’s like the scene in Total Recall where the dude’s eyes pop out.  Or the scene in Altered States at the end where they touch and shit just goes all lightning bolts and they both start screaming.  The results are electrifying, extreme & highly psychedelic.
This entire text corruption experience is further heightened by on board animated backgrounds; rainbows, starfall, twinkling stars, oscillating color bars… all sorts of amazing shit that when combined with glitch FX take your broken dreams to a whole new level.

While the Dead Language is based on the predecessor of the Fritz Decontroller, thus they share very similar circuitry, I have done my best to wire this up so there is no FX overlap.

4/29 VIMEO VIDEO LINKS ARE DOWN. WORKING TO RESOLVE THE PROBLEM ASAP.