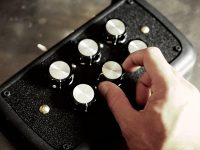 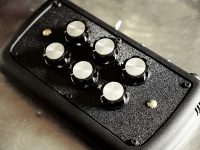 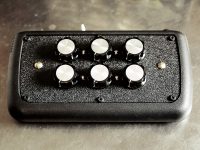 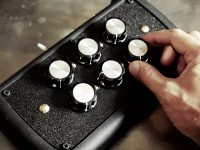 Our best seller is back!  Grab one while you can.  Handheld, compact & powerful.

“The Basic Cable is a highly portable glitch video effects processor capable of rich corruption & edge feedback effects.  It is deep, responsive and analog.  It is an all-in-one de-synchronizer, de-stabilizer, de-controller, de-digitizer, de-visualizer, de-enhancer & degrader. For video signals that are high def, high res, high tech or high fidelity such an instrument of this caliber is imperative.”

The Basic Cable is no mere introduction to glitch video, within it’s six knobs are enough looks to keep you glitching from project to project to project.  Knobs feed off of each other and the body contacts tend to degrade or at times amplify an effect. The body contacts strengthen the organic intent of the machine by letting you breath a little into the circuit.  The Basic Cable has a neon highlights effect, two edge feedback knobs, a sync corruption knob, a black fill effect and a wild card of sorts depending on the revision.

Each Basic Cable is hand-modified & self-hacked with care.  The original circuit that the Basic Cable is based upon comes in many different revisions, thus the effects tend to vary slightly from unit to unit.  I do my best to keep it as uniform as possible  but each Cable is it’s own unique machine.  The most consistent effect is the neon edges effect and a variation of either the internal feedback or the rainbow feedback.

INTERNATIONAL USERS:  Basic Cable ships with a 110/220v power supply and does not need an NTSC/PAL conversion device as long as you are either going NTSC>>NTSC or PAL>>PAL.

4/29 VIMEO VIDEO LINKS ARE DOWN. WORKING TO RESOLVE THE PROBLEM ASAP.